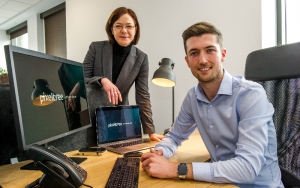 Two new occupiers have taken leases at The Base on Dallam Lane in Warrington, the town’s fast-growing technology and engineering hub.

PixelTree Media and Moorgate Enterprises have taken more than a thousand square feet between them in the Grade A office building, joining a range of leading employers, including Ixis, Meritec and the National Skills Academy for Nuclear.

The grade-A offices on Dallam Lane now houses more than 215 skilled staff in a range of businesses and the new tenants say they are looking forward to becoming ‘part of the building’s eco-system’.

“One of the things that attracted us to The Base was the number of technology occupiers,” explained James Hamilton from PixelTree Media.  “It’s got its own eco-system that we can tap in to. Collaboration is key in our industry so to be surrounded by companies with whom we can share ideas and intelligence was a major pull.”

Sylvie Morton, business development manager for Langtree, which manages The Base on behalf of Warrington & Co said:

“Cluster development is critical to Warrington’s economic future and The Base plays a key role in providing the support and resources for fast-growth technology businesses to thrive.”

The Base provides 50,000 square feet of Grade A office space and is home to over 20 businesses in a range of industries.  The building was developed by Warrington & Co, the private-sector led regeneration arm of Warrington Council.  It is home to the successful BaseConnect online networking platform, which provides a networking hub for leading engineering and technology innovators involved in the Warrington area and has more than 260 members.  More information can be found here.